Kbach Kun Khmer Boran (Khmer martial arts) date back more than a thousand years, as evidenced by carvings and bas-reliefs in the Angkor temples. The martial arts include Bokator, Pradal Serey, Baok Chambab, Kbach Kun Dambong Vèng, amongst others.\r\n\r\nBokator\r\nBokator, known formally as Labokatao, is a Cambodian martial art form that involves close hand-to-hand combat, ground techniques and weapons.\r\n\r\nBokator is one of the earliest Cambodian martial art and is said to be the close quarter combat system used by the armies during the Angkor era.\r\n\r\nPractitioners are trained to strike with knees, elbows, hands, feet and even the head. Short sticks are commonly used as weapon.\r\n\r\nBaok Chambab\r\n\r\nBaok Chambab is Khmer wrestling; a sport in which two opponents try to pin (hold) each other’s back to the ground. A match consists of three rounds. Wrestlers perform pre-match ritual dancing. A wrestler wins a match by two out of three rounds. However, after each round, the loser is asked if he still wishes to continue with the match.\r\n\r\nA Baok Chambab match is traditional accompanied by drum beats; two drums known as Skor Nhy and Chhmol, (female drum and male drum).\r\n\r\nTraditional matches are held at the Cambodian National Olympic Stadium during the Khmer New Year and other Cambodian holidays.\r\n\r\nKbach Kun Dambong Vèng\r\nKbach Kun Dambong Vèng literally refers to an ancient Cambodian martial art form involving the use of a long staff.\r\n\r\nIt has traditionally been practiced to prepare against enemies bearing eventual malice towards their villages and their country.\r\n\r\nNow, it is particularly popular with youths in main sports clubs in Cambodia.\r\n\r\nPradal Serey\r\n\r\nPradal Serey is traditional Khmer kick boxing. A match consists of five rounds and takes place in a boxing ring. There is a one or two-minute break in between each round. Before a match, boxers perform the praying rituals known as the Kun Krou. Traditional Cambodian music is played during a match. The instruments used are the Skor Yaul (a drum), the Sralai (a flute-like instrument) and the stringed Chhing. Boxers are required to wear leather gloves and shorts.\r\n\r\nVictory is instantaneously granted when a boxer delivers a knockout which is determined when the knocked down boxer is unable to continue the fight after a 10-second count by the referee. Victory is also determined at the end of the match when judges decide by a point system which fighter was more effective. If the fighters end up with the same score, a draw is called. 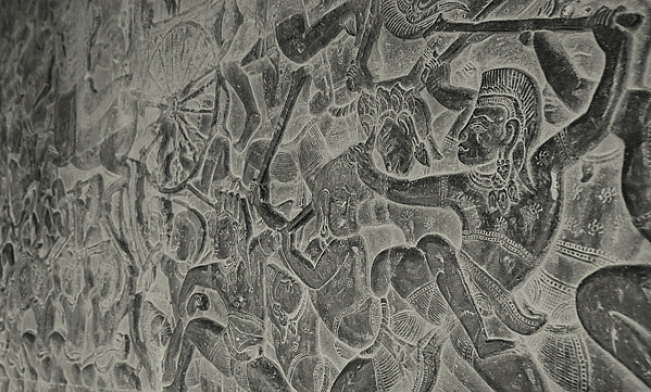